Eyes on a Century by Doris Meadows

My Grandmother, Doris Meadows (1901-1995), was born while Queen Victoria was still alive. She saw the great Zeppelins of W.W.I plummet to destruction. She watched helplessly as close family members fell prey to TB and the Great Influenza Epidemic of 1919. Her eyes beheld the dueling fighter planes over the City of London in the summer of 1940 during the Battle of Britain.

Accounts of her past life enthralled me; I never tired of hearing her stories. Always something new, an aspect of her life's experiences I had never heard of before or, an entirely original account of the past carelessly drawn out of her ever sharp memory and told with a crystal clarity that brought the story to life for me. Her account is a look back through my family's history, and has made me cognizant of the privileged and peaceful life that I have been allowed to live.

However, this story is best told by Doris herself. During 1981 she turned her insomnia to use by quietly penning in the memories of her past, which I then typed out from her written hand and promptly forgot about. It was not until 2001 when my late father came across the transcript. And gave me a copy. I have now placed it here for your edification.

Having emerged from my usual two or three hours of nightly fitful sleep, and knowing that the prospect of further sleep is remote, I have decided to devote the remaining nocturnal hours to some practical purpose.
My family, especially my grandchildren, have often asked me about the outstanding events of my long life. l am now in my eightieth year and during my lifetime have experienced the trauma and horrors of two major wars.
I was born during the turn of the century in a rather dreary suburb of east London, September 1901. The Boer War was still in progress, and I remember my mother telling me I was born during the night of the Relief of Mafeking. My parents had a small newsagents shop. The business could not have been very flourishing and my mother went back to teaching school, and I spent the best part of my very early years in the care of my maternal grandmother who lived in the same district and I loved her very dearly. Incidentally, my father was Irish, and I believe my mother had some Scottish blood. At the age of three I followed some neighboring children to the local elementary school and was allowed to sit in during lessons. Consequently, I could read when I was very young, and indeed have been an omnivorous reader all my life. Sometime during this period, I remember my father taking me for a ride on one of the newly installed trolley cars. The motion of the tram did not' agree with me, and I disgraced myself by vomiting over the satin ribbons of my bonnet and white fur coat. I was taken home in a very sorry and soggy state, my father vowing never to take me on a moving vehicle again.
The business must have failed, and my next recollection is of living in a larger house in the same district, East Ham, also occupied by my various Irish aunts and uncles. I went to a local elementary school together with my sister, Mabel, who was born about thirteen months after me. My Irish relations were quite colourful and sometimes disconcerted my mother, who was of a more sober and practical turn of mind. My only brother was born in this house during the next few years.
Subsequently, my father decided to try his luck with a small pig-breeding and vegetable farm on a plot of land in an adjoining district (Barking). It was a chore for him to travel to Barking several times a day to feed the pigs, etc. We were then transported to a small house which he found and rented nearby. My mother was dismayed when she saw the house. It consisted of four small rooms with an outdoor toilet and no bathroom, and the neighborhood d was a bit o f a comedown after East Ham. However, she made the best of it and my other two sisters, Vera and Constance, were born there. The school we attended was a very good one with some very dedicated teachers, one of whom left a life-time impression on me. My father during this period started a stevedoring business in the East London docks and employed my Irish grandfather to help him out.

Then came along the 1914-18 war, with all its attendant horrors. The fate of the soldiers in the trenches in France was absolutely appalling; they were bogged down in mud for days on end and suffered terrible casualties. Practically every day a neighbor would come into my mother bearing the dreaded official telegram "Husband or son missing or killed in action". On the home front food was becoming very scarce, so many ships being sunk by enemy submarines every week. There was no real form of rationing and people stood in queues for hours to obtain the necessities of life. Municipal soup kitchens were set up where food of a somewhat dubious nature could sometimes be obtained. Refugees same flooding in from Belgium and France. The children were put into our schools and housing of some sort was found for their families.
My father would have been conscripted for the army, but he contracted a very virulent form of Tuberculosis (Galloping Consumption) and was a sick man. In spite of my mother's care and devotion, he died at the early age of 41, and she became a widow, herself on 36, with five children to care for, and very little in the way of financial resources. By arrangement with the Shipping Company for whom my father had worked, my mother was able to carry on the clerical side of the business, and my grandfather took over the hiring of labour, etc. For a time this did bring in some income, but my grandfather being an alcoholic, was unreliable and difficulties arose. However it did help over the first few years of my father's death, and my mother carried her side of the transaction very efficiently.
The German Zeppelin raids on London were now becoming very frequent, and every night we had to seek shelter in cellars, etc., our own gun fire was very heavy. I can vividly remember a Zeppelin directly overhead being hit and brought down in flames. It was an awesome sight, although very exciting. We were to witness several more being destroyed, although none so near home. There were also sporadic air raids during daylight but compared to the raids during the second world war, the damage was comparatively slight.
At the age of thirteen, having been in the top class for the prescribed period, I was allowed to leave the elementary school. Owing to financial difficulties at home, I was unable to take advantage of a scholarship to a more advanced technical school. My mother, however, was adamant that I should have some further training and managed to send me to a small Commercial College, where I learnt shorthand and typing for about nine months. At the tender age of fourteen, I was out in the world as a shorthand typist. The wage I earned wasn't very high, but still a welcome addition to the family financial resources. 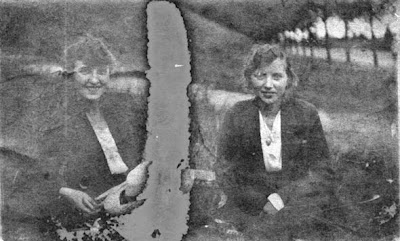 My sister, Mabel, followed in my footsteps and also became a shorthand typist. Unfortunately, she developed a very bad cough which didn't respond to treatment. In desperation my mother took her to a Harley Street Doctor in the prestigious west end of London. To her horror, he diagnosed advanced T.B. one lung already destroyed and the other affected. She was sent to various sanatoriums in an effort to halt the disease, sometimes making progress and then regressions. She eventually came home and lived in an open-air hut in the garden. She lived with this disease from the age of 14 to 21. During her good periods and being a person with great spirit, she started a small dressmaking business at home, making blouses, etc., for friends and neighbors. The business was very successful and enabled her to be practically independent. She was a very brave and beautiful girl, had a great zest for life and was adored by all who knew her, including her doctors. She died just after reaching the age of 21. The doctors attributed the fact that. she lived for seven years, to the care and devotion she received from my mother, and to a lesser degree the whole family and friends; also to her marvelous courage. I was particularly close to her, and her death to me was devastating.
My sisters, Constance and Vera, also began to exhibit Signs of the disease, but fortunately it was halted in time, and they have led healthy and productive lives. My only brother, Fred, went to California after the second world war, to work in the Drawing Office at Chryslers, and as he is living in the same continent, we are able to keep in touch.
Ironically, TB. has now been practically wiped out. Had the present day drugs been available, the tragic deaths of my father and sister may have been averted; also the untimely deaths of my Irish uncles. I never knew my Irish grandmother. She died an early death, leaving thirteen children, the last one a baby in arms.
At the age of sixteen, I went to a party given by a neighbor in honor of her nephew, who was on sick leave from the Merchant Navy. His ship had been torpedoed in the English Channel and he was convalescing from an illness caused by shock and exposure, having spent many hours clinging to a raft before being rescued. He had an unhappy home life, and had run away to sea after his father had been killed in the Battle of Jutland. He served as a cabin boy on an oil tanker. I suppose I was at an impressionable age and was thrilled when he appeared at our home the day after the party, and asked my mother's permission to take me to a cinema. I was very willing, he cut quite a figure in Merchant Navy uniform and was very personable. This wasn't altogether to my mother's liking in view of my age and his uncertain prospects. We did go out that night but had to take my younger sister along as a chaperon. We continued to see each other until he was called back to duty, corresponded and met whenever he had leave. All this was very exciting. -
After the 1918 Armistice, and as a reaction to the drabness of the war years, dancing and the theatres became very popular, and people in general were out for a good time. However, unemployment was very acute and it was heartrending to see our former heroes abandoned. Many ex-servicemen took to the streets as itinerant musicians, etc; in order to get a few shillings together for a nights lodging. To add to our troubles, the Spanish flu reached England and decimated the population. My own maternal grandfather was a victim of this plague and dropped dead on the street on his way home from work. This was particularly sad as he was reaching retirement age and had planned to realize his life dream and buy a farm in the country, using his hard earned savings. My grandmother lived for a few more years, but never really recovered from the shock.