Dark Matter and Absolute Vacuums have similarities - and differences.
Dark Matter was hypothesized to account for discrepancies between measurements of the mass of galaxies, clusters of galaxies and the entire universe made through dynamical and general relativistic means, and measurements based on the mass of the visible "luminous" matter these objects contain: stars and the gas and dust of the interstellar and intergalactic media. In October 2010, llídio Lopes and Joseph Silk published an article in the journal Science, proposing that Neutrino Spectroscopy Can Probe the Matter Content in the Sun.

Absolute Vacuum theory (“Can Gravity be Induced?”, Stephen Goodfellow, 1979), suggests that under specific physical conditions, absolute vacuums are maintainable and that these ‘reverse singularities’ induce gravity, a production of gravity without a corresponding mass. Goodfellow’s theory proposes that the Sun’s interior is a gravity inducing absolute vacuum, sheathed in a magnetically sustaining super-hot plasma shell, the absolute vacuum interior impervious to mass/energy/space - including neutrinos.

Both models claim to block neutrinos.

The main differences between the Dark Matter and Absolute Vacuum models, is that the dark matter proponents visualize these mysterious particles being pulled into the Sun’s gravitational core over time, blocking neutrino activity in the core. 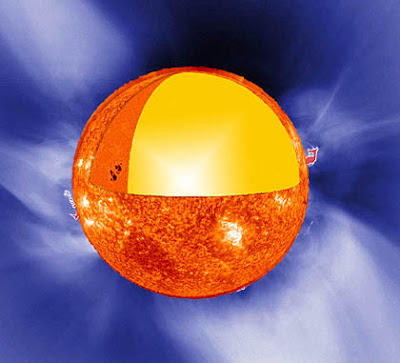 The Absolute Vacuum hypothesis maintains that the Sun's ‘non-space’ interior blocks neutrinos from the opposite side of the solar shell so that they are unobservable. 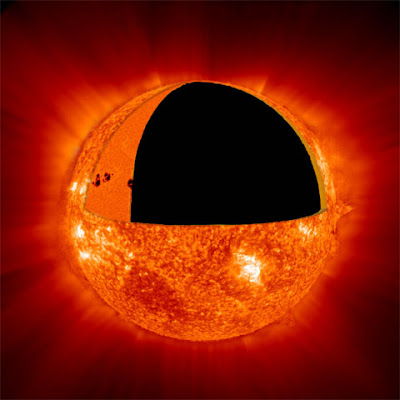 The answer is to be found in the neutrino record, as this data accumulates.

According to dark matter proponents, solar neutrinos must come from deep inside the Sun, in a hypothesized massive core.
Neutrinos in the absolute vacuum solar model propagate near the visible surface of the Sun, the Sun's actual mass being distributed in an exterior shell, the internal absolute vacuum generating induced gravity, responsible for the majority of the Sun's gravity. 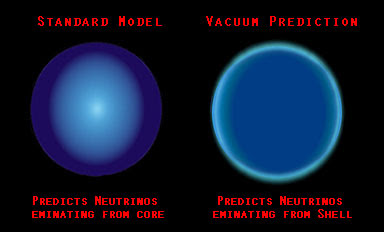 To summarize, the dark matter hypothesis should exhibit a central cluster of neutrinos whereas the absolute vacuum model would exhibit a halo of neutrinos. It will be interesting to see which proposal corresponds with future observational data.
Posted by Goodfellow at 6:53 AM