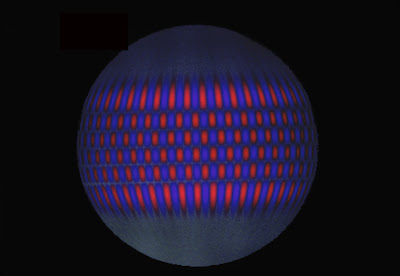 Helioseismology is the study of rhythmic oscillations observed on the 'surface' of the Sun.
In order further our understanding about what is going on, laboratory experiments are being performed on models, in an attempt to create on a smaller scale as to how the Sun might be propagating these oscillations. Most of the oscillation research that pertains to helioseismology interprets the origin as a single oscillating source, namely a fusion core, and so much of the research only considers one oscillation source, to mimic the proposed fusion core. But what if the Sun were merely a sphere of hydrogen with a non-space interior, as proposed in "Can Gravity be Induced?"
What would happen if we were instead to consider two oscillating sources, one originating from the North pole using a hollow, partially vacated sphere, and another source of oscillation placed at the South pole? (See Illustration) 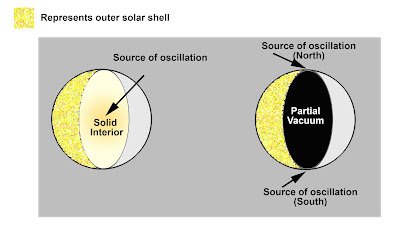 Imagine if we could generate waves from the North and South poles. Tweak them so they are slightly out of sync so they create wave interference in the equatorial region, much like the momentary vibration caused by two ship propellers slipping in and out of sync. Would that not look a lot like the 11.11 year solar sunspot cycle?

It is difficult for the trained solar scientist to consider a non-space Sun, because it transgresses our pre-conceived conception of gravitational behavior, basic tenants that have unfortunately become entrenched dogma, holding that gravity and mass are inviolate. Indeed, experiments demonstrate this to be true for solids, liquids and gasses - but little to no experimentation has been performed in this realm on the 4th state of matter, namely super-hot plasmas. This is a shame, because over 90% of the Universe is in this state.
Imagine a scientist listening to a live symphony in an orchestral hall. The scientist is now blindfolded and we switch out the orchestra and replace it with a high quality reproduction. The scientist cannot tell the difference. In the same manner, how does a scientist know if the object is a Sun with a dense interior or a empty shell? All the scientist has to go on is past experience, and I suggest that in this case the experience is faulty.
What is left to us is to attempt to infer by experimentation if we are observing vibrations welling up from a dense hydrogen/fusion solar interior, or are we looking at a maintained solar plasma shell crushing in on sustained subterranean magnetic fields?
Posted by Goodfellow at 10:21 AM