Can Gravity be Induced by an Electrical Discharge?

As I reflect over the past thirty-odd years data-gathering and contemplating the possibilities of inducing gravity, I find that the process realizing gravitational induction has been as much alchemic as empirical.
And there lies the rub.
Being on the cusp of attempting to convince and organize the necessary individuals and institutions in an attempt to realize the electrical discharge/laser experiment, I find that the observational evidence I have at hand is so absurdly fantastic as to be scarcely creditable to the uninitiated mind. Three hundred years believing gravity is in direct proportion to mass is a very tough mindset to overcome.
Empiricism, all-be it crude, is presently the only tool of objectivity that reasonable individuals can mutually agree to, and only a direct, repeatable laboratory experiment will suffice.
The evidence at hand, demonstrating that an electrical discharge contains the elements that allow for the induction of gravity (producing gravity without a corresponding quantity of mass,) simply lacks credibility. It is in effect a closed loop: the circumstantial evidence is unbelievable, thus, the experiment cannot be performed by responsible scientists without their committing professional suicide.

Consequently, instead of relying on thirty years of information gathering, I intend to embark on a simple line of reasoning, essentially cloaking a wolf in sheeps' clothing. It is in this manner that the finished paper appear for publication.

The proposal for the experiment proceeds upon two lines of argument:
A. Discussing the brute nature of an absolute vacuum, where one might seek out the phenomenon, then illustrating this in a practical means by pointing out the unusual behavior of dissociated electrons and protons imbued with a dynamo effect, how during the moment of electrical discharge, electrons and protons separate into like camps of same polarity, electrons with electrons, protons to protons. That these two repelling camps then interact with one another, the force being sufficient to create disturbances in the space fabric, creating momentary absolute vacuums. The force of the inward collapse of these absolute vacuums being indistinguishable from the force of gravity, de-coupled from a corresponding quantity of mass.
Admittedly the argument stretches credibility. It is not unlike the Montgolfier brothers attempting to increase buoyancy of their balloons, mistakenly believing lift was due to the quality of smoke, when in actuality is was merely the heat achieved by combustion. Keep in mind however that despite this mistake, their balloons nonetheless rose from the ground.

B. If, as the reasoning for (A.) points out, the implosion of absolute vacuums is indistinguishable from gravity and that implosion is a result of a phenomenal amount of energy release, then it seems reasonable to ask, can this phenomenon be observed in nature? In other words, does an electrical discharge contain gravitational properties?

Fortunately, it is a question that can be resolved by a constructing a fairly unsophisticated laboratory experiment. 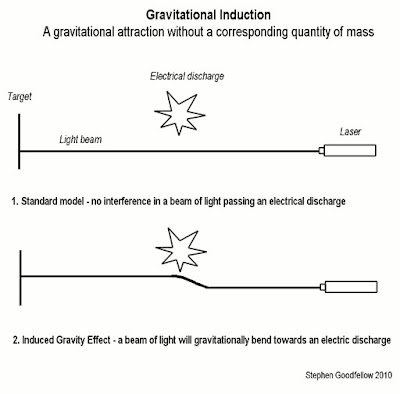 1. Conventional reasoning would state that a beam of photons are not effected by electromagnetism and must proceed unhindered towards the target, which should register no movement or qualitative change during the electrical discharge. However, I predict the laser will exhibit a gravitational shift towards the discharge, and will register this movement at the target sensor.

2. The 'bend' in the laser beam at the moment of discharge ought to exhibit a small redshift, as its path between the laser and the target has been extended.

3. As the vacuum collapses it may produce additional repeatedly diminishing electrical discharges, the energy dispersing much like that of a bouncing ball. This 'echo', illustrated by a series of diminishing redshifts ought to be present at the target, if the sensor is sufficiently sensitive enough.

I believe this approach gives a line of reasoning that responsible individuals may commit to. The conceptual simplicity of the experiment combined with a realistic chance for a successful result, may tempt the more adventurous individual.

To demonstrate that light can be gravitationally distorted without the corresponding quantity of mass would be nothing less than sensational news to the science community, and should it turn out to be a null result, it would confirm the present paradigm. To the professional researcher contemplating this experiment, a null result would pass with little comment by the science community.
Posted by Goodfellow at 4:30 PM