The Limitations of Quantum Mechanics 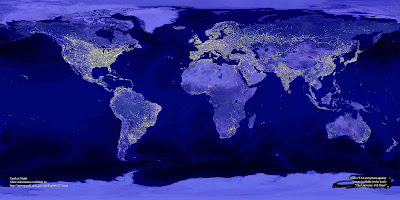 Imagine for a moment, god-like creatures looking down upon the Earth, creatures who's time consciousness is accelerated, so that to them our 24 hour day was no longer than that of a heart beat. They might view these glowing cities that spread over our planet as mere crystals, and could justifiably make quanta predictions on the sustainability their growth, based on the lub-dub of their pulsations: five beats caused by our 9-5 traffic, with the two pulse pause created by our weekend.
To these gods, the business of individuals could only be resolved by their mass movement along roads and freeways and the gods might - correctly so - speculate that this flow could be considered as discrete packets of mass/energy.
As with quanta mechanics, the model is limited by the belief that the only important factor is what the bulk of the packets are doing at any given moment...but you and I know that other factors are in play. Between the 9 to 5 lub-dub of our traffic flow, during the dead of night sanitation workers and vital resources that make a city run are on the move. These are errant particles that quantum mechanics do not account for and consequently these gods only have a stilted picture of the actual reality.

In my opinion, this is a problem that 21Century physics has to come to terms with. Quantum mechanics is an artificial overlay of reality, and it may well be that vital forces of nature are being overlooked because of the faith we have placed in our statistical calculations.
Posted by Goodfellow at 6:28 PM