Right now things are moving at quite a clip in my "Stevie Science" world. Here are the highlights:
Placing a query in the physics and astronomy forums, someone pointed out to me that the experiment that I was looking for, essentially a gravimeter placed near a z-pinch (a high energy electric discharge,) has recently been carried out with reportedly positive results.
("Gravitational Interaction on Quantum Level and Consequences Thereof") Truth to tell, there is so much gobbledygook equations in it that I can barely understand, but I think I get the gist.
I wrote the authors and got an answer back from S.I. Fisenko saying that it will be published shortly.
The physicist I visited at U of M - Dr. Ron Gilgenbach - told me that such an experiment could not be carried out without a published supportive theory to back it up. Well, if this gets published in a respectable peer-reviewed science journal then it meets the criteria for a repeat of the experiment. I'm hoping I can egg Ron into it, though frankly I will not be surprised if he just dismisses the whole thing. After all, I'm just an artist cook :-)

The import of this paper - if it is verified and if it is what I think it is - will turn the world of physics inside-out.

In related developments, Yukio Tomozawa, an eminent solar neutrino physicist from U of M, has agreed to an interview next Wednesday. I intend to ask him if there is enough detail in solar neutrino angle of incidence to be able to tell where on the Sun the neutrinos are coming from. 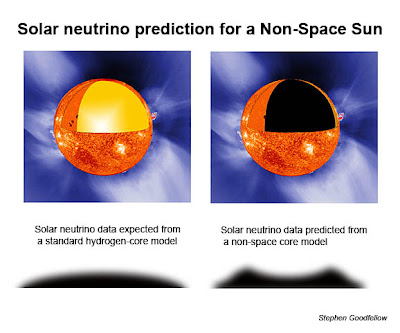 Posted by Goodfellow at 9:31 PM