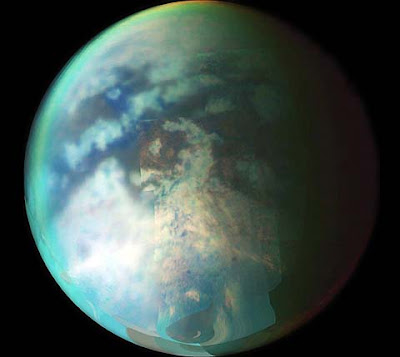 
"Why we may find life on Saturn's Moon Titan"

Perhaps it would be going out on a limb, but would it not be possible that Saturn’s surprisingly active moon Titan might support a unique life-form? This moon exhibits temperatures that make superconducting electrical currents a certainty, and there is an awful lot of chemistry sloshing about. Might it not be possible that some pretty stunning surprises await us?

Addendum 01/06/11 - I realize that the temperatures on Titan's surface are exceedingly cold, but we have already been surprised more than once on the tenacity of life. Consider the creatures thriving around the oceanic ridge vents in temperatures above boiling on our own planet. If there is chemical movement on Titan (note the river deltas welling into Titan's mysterious oceans,) and the now observed complex molecules in it's atmosphere - combine that with temperatures that allow for super-conduction; well, I'd say there is a pretty good chance that something really exciting is happening on that surface.


Update: 12/31/2010 - Nice to find oneself on the bleeding edge. Here is an article quite some time after my musing:
"Did Life Fall from the Skies? Lessons from Titan"

And earlier still: 10/20/10
ScienceDaily (June 7, 2010) — Two new papers based on data from NASA's Cassini spacecraft scrutinize the complex chemical activity on the surface of Saturn's moon Titan. While non-biological chemistry offers one possible explanation, some scientists believe these chemical signatures bolster the argument for a primitive, exotic form of life or precursor to life on Titan's surface. According to one theory put forth by astrobiologists, the signatures fulfill two important conditions necessary for a hypothesized "methane-based life."
Posted by Goodfellow at 6:43 AM

I think there is life on Titan because: One study suggested that hydrogen was flowing down through Titan's atmosphere and disappearing at the surface. Astrobiologist Chris McKay at NASA Ames Research Center speculated this could be a tantalizing hint that hydrogen is getting consumed by life.

Now wouldn't that be cool? (In both senses of the word :-)