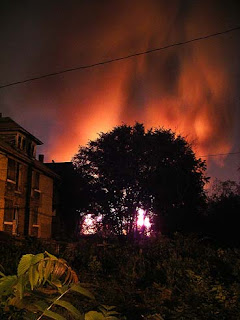 One of my 'burning Detroit' photos


Notes:
Throughout the 80’s & 90’s Detroit's “Layabouts” covered David Bowie’s “Panic in Detroit” many times, and although the band had its own interpretation, we stuck pretty faithfully to the lyrics.
If I had a time machine, I would love to replace them with this freshly constructed interpretation.
Of course, the ailments that Detroit suffers are complex and cannot be attributed to a simple cause. Nonetheless, in this lyric reinterpretation of David Bowie’s “Panic in Detroit” I have lumped all ills into the personification of a fictional individual whose greed and avarice spells the city’s demise.
As to cadence, I have tried to remain as faithful to Bowie’s lyrics as possible, keeping a line or two intact as they cannot be improved upon.
Posted by Goodfellow at 12:01 PM