Is the Gravitational Constant linked to the Sunspot Cycle?

Why is the Gravitational Constant so sloppy? Is it merely measureing error, or is there room to argue that the constant may fluctuate between the 2nd and 4th decimal?

Before posting these questions on the baut forum, I checked the Bautforum for previous posts, the most relevant one seems to be this query in aid of a seemingly dead-end contentious debate, which was of little help.

Following a reference link from Wikipidia's page on "Gravitational Constant", note this excerpt from the abstract:
"...G stands mysteriously alone, its history being that of a quantity which is extremely difficult to measure and which remains virtually isolated from the theoretical structure of the rest of physics. Several attempts aimed at changing this situation are now underway, but the most recent experimental results have once again produced conflicting values of G and, in spite of some progress and much interest, there remains to date no universally accepted way of predicting its absolute value..."


The measurements seem surprisingly sketchy when considering that most Universal Constants can be measured to the 8th to 10th decimal.

For reasons out of the blue, I took it into my head to place the year that Gravitational Constant measurements were taken in relation to the sunspot cycle. Needless to say, this data is thin to the point of being laughable, but still - an amusing thought: 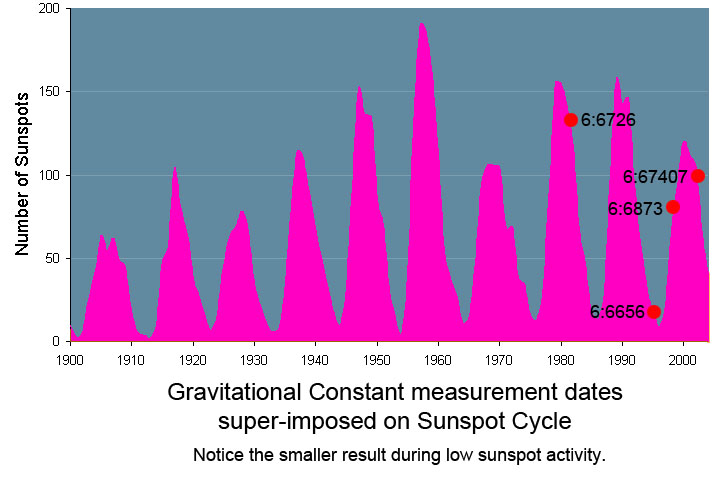 Posted by Goodfellow at 1:33 PM

That is true that some progresses can be made, but the current theories are on the way of it, even if some have a funny way of existing. Finally I did really enjoy your article.

Interesting thought. But notice the larger G measurement at mid- sunspot cycle. Check the 2008 NIST publication (CODATA 2006) that lists all the current G measurements used to form the world average (there are 8).

I've been measuring big G for the last 8 years. It's one of the hardest measurements to make. Keep in mind that EM is 10^39 times stronger than gravity (e.g. in the H atom). I'm not surprised the value is not as precise as other constants.