Nauru and the coming of the Space Elevator Complex

Open Letter to the Government and President of Nauru:


It may not have come to your attention yet, but the Republic of Nauru is about to become the most valuable real estate on our planet, because it is one of the very few locations where a space elevator can be realized. 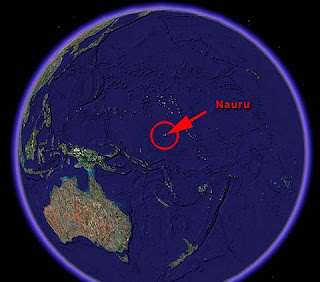 For physical reasons, the space elevator can only be constructed on or near the equator. Your country is ideally suited because Nauru has harbor installations, asphalt roads and a landing facilities capable of handling large aircraft. Most importantly, it is an island surrounded by thousands of miles of ocean. Hence, security will not be an issue.
If you look at a globe and circumvent the World at the equator, you will see that most of the equatorial landfall is on countries that are politically unstable and where security would be a real issue. The other few islands that exist on the equator have no infrastructure to speak of. These factors make your nation a very attractive site for the space elevator complex.

Because of these factors, it would behoove your government to give close consideration to this issue and take a pro-active stance. It would be nice to see Nauru gain a long term benefit from this resource, rather than have it become an exploited Panama, or as in your not so distant past, a wholesale rape of your island by mining speculators. 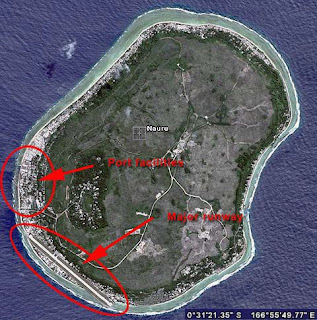 Could the unproductive land in the island interior be nationalized? If that were possible, it could be leased to the highest bidder without the conflict that would inevitably occur if it were left to real estate speculators.


When you have your ducks in order, it would be prudent to start making NASA, the European Space Agency and the Chinese Space agency aware of your real estate. As far as the media goes, this will be a very "sexy" issue, and your nation is sure to gain a lot of coverage, long before the space elevator is actually realized.


Respectfully yours,
Posted by Goodfellow at 1:45 PM